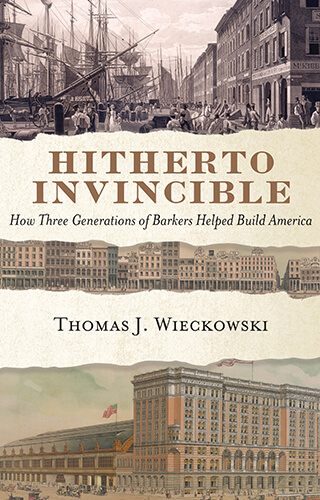 I am pleased and excited to announce the publication of my new book, Hitherto Invincible: How Three Generations of Barkers Helped Build America, available this fall from Palmetto Press.

This enlightening and entertaining book lays out the rich history of Jacob, Abraham, Anna, and Wharton Barker, their families, and their diverse enterprises during the 19th century, including their struggles for abolition and racial equality.

A New York banker, Jacob Barker was the largest ship-owner in the country and a financier of the War of 1812, as well as a founder of the Democratic enclave of Tammany Hall in New York City. He audaciously saved the White House portrait of George Washington from the invading British during the 1812 War as the capital burned. In New Orleans during the Civil War, he was a leader of the pro-Union community and was elected to Congress after the war.

Jacob’s son, Abraham, was president of the stock exchange in Philadelphia and the banker for the industrialist Joseph Wharton. As the Civil War progressed, he was a co-founder of the prestigious Union League, vowing to support President Lincoln’s efforts to preserve the Union. An ardent abolitionist, he organized and managed the first training camp for Black soldiers during the war and was a leader of the movement to abolish segregation in the city's trolley system.

Abraham’s sister Anna married the co-founder of the Metropolitan Museum of Art and was involved with him in a celebrated love triangle with ill-fated author and feminist Margaret Fuller. She was a beloved figure in the Transcendentalist movement and a friend of Ralph Waldo Emerson.

Abraham’s son Wharton pursued international business opportunities including obtaining exclusive rights to build a telephone system in China. He was knighted by Czar Alexander II for constructing four warships at the famous Cramp shipyard in Philadelphia in 1878. Wharton advocated that Mexico, Canada, and the U.S. cooperate in a mutually beneficial trade agreement, an idea a century ahead of its time.

While relating the fascinating stories of these interesting and important historical figures, this well-researched book presents a novel and intimate view of 19th-century life in a growing and tumultuous Philadelphia and America.

A Spectacle for Men and Angels: A Documentary Narrative of Camp William Penn and the Raising of Colored Regiments in Pennsylvania 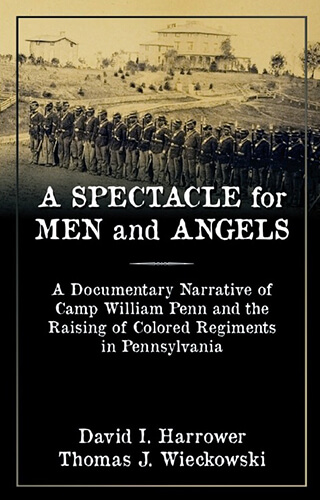 Camp William Penn, located just northwest of the City of Philadelphia, was the first and largest of the camps established to train black troops during the Civil War. In less than two years, it trained over 11,000 soldiers for service in the United States Army.
It has been called the most written-about war in history and the most discussed event in America. The Civil War was a momentous occasion in the development of the nation that defined the future direction of many aspects of American life.

Like Mandelbrot's intricate fractal designs, the singular event of the war was comprised of many locations, battles, human figures, and events that each had its own story and repeating sub-themes. Together, they constituted the mosaic of the great conflict between the States. And thus, it has been the inspiration for such an extensive body of historical works, novels, poems, songs, and stories.

Camp William Penn was one of those contributing elements in the mosaic of the conflict. It existed for only a relatively brief moment in time, from June 1863 to May 1865. Largely forgotten today, often just a footnote in discussions of emancipation and the quest for racial equality in the mid-nineteenth century, the establishment of Camp William Penn nonetheless dramatized the many elements of the great social issues of the day. Studying it presents a window into mid-nineteenth century life itself: but even more importantly, it displays a microcosm of the disputes that afflicted society and resulted in the murderous chasm not only between two sets of states but between two sets of citizens of the republic. Its success was also one step, a surprisingly influential one, in the resolution of those divisions.

The present work examines the Camp William Penn phenomenon from a different perspective. As a "documentary narrative," it will follow the events that led to the creation and ultimate operation of the camp in the words of the people who lived with the camp at that time. This book assembles selected but key newspaper articles, speeches, circulars, rarely seen letters, and government orders that together tell the story of Camp William Penn. By doing so, the modern reader will be able to experience the particular flavor of the language and modes of expression of the day, the arguments on both sides of the issue, as well as see the details unfold in the same manner as residents of the time.
If the reality of history is that Camp William Penn is largely forgotten, this book is a testament to the proposition that it ought not to be. 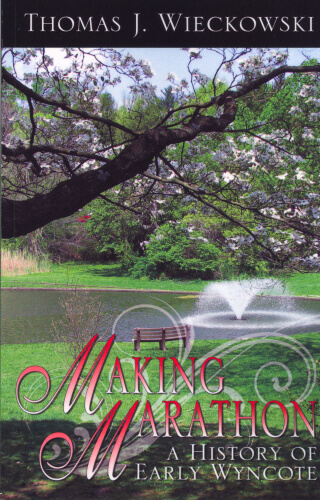 Facetiously called "Marathon" by a famous author and resident, the area was discovered in the second half of the nineteenth century by wealthy industrialists and capitalists who made it the first Gilded Age suburb. This lecture follows the development of the land from William Penn's green countryside, through Gilded Age resort, to the village for "the rest of us." Nationally known bee-keepers, international bankers, entrepreneurial congressmen, and dabblers in the novel sport of professional baseball made the community we know as Wyncote today. They flocked to the new village for the clean air, lush landscapes, and picturesque rolling countryside that promised "calm contentment and restful influences of country homes."